In the Carolinas, the lyric "We're goin' to Surf City, 'cause it's two to one" has a different meaning different than Jan and Dean intended in their 1963 hit record about Huntington Beach, CA. 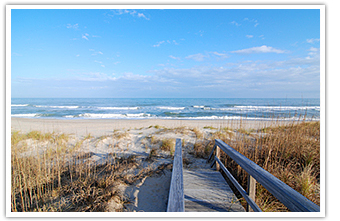 The island is right between Wilmington, NC. and Jacksonville, NC--it's about a 30-minute drive to the heart of either of these metropolitan areas on Highway 17, which is currently being upgraded to a four-lane coastal highway that will stretch from Virginia to Florida.

Surf City is Pender County's fastest growing town, boasting nearly 2,000 full-time residents. North Topsail Beach has nearly 900 residents; Topsail Beach, on the southern tip of the island, boasts approximately 500 year-round inhabitants. In the summer, the population swells to more than five times this size, as visitors flock to the beaches via the historic swing bridge connecting the town and the mainland.

Lifestyle and Leisure in Surf City and the Topsail Beaches

Local lore says that Blackbeard and other pirates once hid their ships in the channel between Topsail Island and the mainland with the hopes of surprising and looting passing merchant ships. The top sail was the only part of the pirate vessels visible from the Atlantic Ocean, so merchant ships learned to watch for the "Topsail" when entering the area. Some even believe that Blackbeard buried hidden treasure on Topsail Island, making it a favorite destination for metal detector enthusiasts.

These days, you won't find pirate ships in the Intracoastal Waterway around Topsail Sound, which separates the island from the mainland. You're more likely to see canoes, kayaks and private watercrafts navigating the nearby estuaries and wetlands off of this narrow body of water. 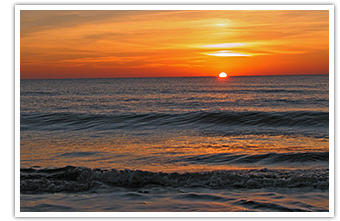 Pirate legends aside, visitors to Surf City, Topsail Beach and North Topsail Beach say arriving on the island feels like stepping back in time to a simpler era when surfer rock was at its peak and life revolved around surfboards, pretty girls, big waves and fast cars. Surf City and the Topsail Beaches evoke a laid-back, family-friendly atmosphere where clean water, glorious sunrises, and romantic sunsets are still the main attractions.

Surf City is the commercial hub of the area, featuring restaurants that serve up coastal cuisine and Southern American classics. On the beaches, gift boutiques and specialty shops cater to tourists, offering resort wear and souvenirs. Topsail Beach is also home to a general store and the island's only bookstore, Quarter Moon Books.

Several locally owned and operated motels provide accommodations overlooking either the sound or the ocean. Along the U.S. 17 corridor, just outside of the Greater Topsail Area, one discovers rapid commercial growth, with professional service companies, large retailers, pharmacies, restaurants chains, and supermarkets setting up shop.

Humans aren't the only creatures who appreciate the Topsail Beaches. Each summer, Logger head sea turtles make nests along the island's 26-mile shoreline. Volunteers walk every bit of the shoreline daily, watching for turtle nests and working to protect the hatchlings of this endangered species. The Karen Beasley Sea Turtle Rescue and Rehabilitation Center is a hospital for sick or injured sea turtles (one of only three on the east coast) which also serves as an educational center for concerned residents and curious visitors of all ages. 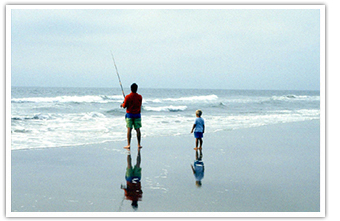 Other popular hangouts are the three piers on the island, one named the Jolly Roger Fishing Pier. The Topsail beaches also boast marinas and boat ramps so residents and visitors can enjoy boating, water sports and fishing in the Gulf Stream. For those who like to stay closer to shore, relaxing walks on the beach yield an ample variety of seashells.

In addition to its public access beach areas, residents can also enjoy a bike path, a roller rink, and miniature golf. And, of course, for those prefer the real sport to its diminutive counterpart, dozens of first-rate public golf courses are just a short drive away.

In September, enjoy Tasting With Topsail, an event that highlights wines from regional vineyards. October brings Autumn with Topsail, a fall festival hosted by the Historical Society of Topsail Island. The festival features a juried Artists' Court where regional artists display and sell their works. The event is rounded out by live music, food vendors, a beer and wine garden, and carnival games. A Saturday night concert features a beach music band.

Economy and Government in Surf City and the Topsail Beaches

Tourism remains the cornerstone of the economy in Surf City, North Topsail Beach and Topsail Beach. Each township is governed by a council-manager form of government, consisting of a mayor and commissioners who appoint a town manager. The communities which span Pender (Surf City, Topsail Beach) and Onslow counties (North Topsail Beach) work closely together to represent the interests of the Greater Topsail Area.

Retirement in Surf City and the Topsail Beaches

With a mild climate and beautiful beaches, Topsail Beach, North Topsail Beach, and Surf City are attracting retirees in ever-increasing numbers. Add spectacular sunsets over the sound and incredible sunrises over the sea, and Topsail Island could easily star in an ad for idyllic retired living.

In fact, newcomers of all ages are making the Topsail area their permanent home because they appreciate the affordable lifestyle and quiet atmosphere the area has to offer. The convenience of its close proximity to neighboring cities also plays a role in why Topsail Island homes for sale always remain a hot commodity. City shopping and larger employers can be found just 25 miles away in either direction, with Wilmington to the south; Jacksonville and USMC Camp Lejeune to the north.

Real Estate and Housing in Surf City and the Topsail Beaches

Pirates weren't the only ones to find treasures on Topsail Island. The Greater Topsail Area harbors some of the best property buys on the coast. Oceanfront condominiums start in the low $100's; modest island homes can be found in the $250,000 range. Luxury properties with million-dollar price points offer priceless views. With a huge population influx in the summers, purchasing Topsail Island real estate is a smart property investment. Vacations homes on the island have steadily appreciated in value and are easily rented during the peak summer season.

Whether you choose one of the high-end oceanfront homes for sale in Topsail Beach or a low-maintenance condominium in Surf City; whether you prefer early morning sunrises or relaxed evening sunsets; you're guaranteed to find relaxed ambiance, convenience, and choice on Topsail Island. If you would like to own real estate in one of these beautiful island communities, please Contact Us today.

Ready to Search for Topsail Beach Homes for Sale?