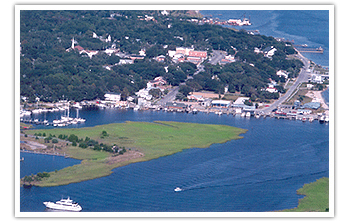 One of the most charming towns on the Carolina coast, the historic harbor town of Southport is full of history, romance, and character. It's in Southport where the mouth of the Cape Fear River intersects with the Intracoastal Waterway and the Atlantic Ocean.

The streets of Southport are lined with majestic oaks that shade historic Victorian homes and cottages, many of which belonged to river pilots, ship captains, and perhaps even a pirate or two! Cozy neighborhoods surround the historic Howe Street, the main artery of a vibrant downtown district with five blocks of antique and specialty shops, art galleries, restaurants and professional offices.

Southport looks and feels like an authentic established community, a refreshing contrast to more recent planned communities of look-alike houses—just one of the many reasons to fall in love with this coastal gem.

Lifestyle and Leisure in Southport

Southport is steeped in Americana. In fact, for more than 200 years, the City of Southport has celebrated our nation's independence with a Fourth of July Festival. Every year, vendors from across the country and more than 50,000 visitors travel to Southport for four days of fun and excitement downtown. Highlights include hundreds of arts & craft booths, food vendors, a 5K race, a parade, live entertainment and fireworks.

Although July 4th might bring noisy music, large crowds and exciting fireworks, for the rest of the year, Southport returns to its authentic nature, that of a quiet, quaint fishing village of approximately 3,000 year-round residents.

A busy seaport in colonial times, Southport remains one of the few active fishing villages in North Carolina with several dockside restaurants featuring the fresh, local catch. Every October, the town hosts the U.S. Open King Mackerel Tournament, a major saltwater fishing event that lures competitors from up and down the East Coast. Clearly, boating and sailing are also important activities that attract many families to the area.

In addition to its charming harbor, Southport boasts 28 miles of sandy beaches and several lighthouses. Its picturesque locations have been featured in several television shows like "Dawson's Creek" and "Spies", and the movies "I Know What You Did Last Summer," "Summer Catch," and "A Walk to Remember".

Year-round, there is always something happening in the area: fishing tournaments, parades, community concerts, home tours, and outdoor festivals such as the Christmas by the Sea Festival. One of the best ‘attractions', however, is the weather. Southport is geographically unique in that it sits among so much water. The sea breezes from the river, the ocean, and the Intracoastal Waterway keep the town cooler than other localities during the steamy summer months.

Waterfront Park provides gorgeous views of the area where these three bodies of water meet and where sailboats, fishing boats, ferry boats, and transoceanic vessels pass by. Further west, trails wind along the waterway and the scenic Old Yacht Basin ending at the state-of-the-art Southport Marina.

Stroll through the town, and you'll discover beautifully preserved historic homes and cottages, including the one where author Robert Ruark (author of "The Old Man and the Boy") spent much of his youth with his grandfather, the inspiration for his series of books. Franklin Square Gallery, an historic building dating back to 1904, is located behind Franklin Square Park. It is a community gallery run by the Associated Artists of Southport, a volunteer group that features the work of local artists.

With more than 15 golf courses available in Southport and Brunswick County and more than 100 daily fee courses in neighboring areas like Myrtle Beach, it's easy to find an available tee time.

Economy and Government of Southport NC

Listed on the National Register of Historic Places, this seaside town has deep roots in the Civil War and once was a hide-out for pirates such as Blackbeard and Stead Bonnet.

Southport's history dates back to the mid-1700s, when Fort Johnson was constructed to protect upriver settlements like Wilmington (which is just 27 miles north of Southport). The community soon became home to river pilots, traders, fishermen and military men.

Officially founded as Smithville in 1792, Southport got its name in 1887 as a result of a campaign to build itself into a major port city. The port went further upstream to the City of Wilmington, but Southport retained both its name and its entrepreneurial spirit. Today, the local economy is driven by tourism, construction, and real estate.

Interestingly, renewed efforts to finally turn Southport into a major port have been a recent focus subject of media attention. A 600-acre parcel of land was acquired and approved for the proposed North Carolina International Port. This caused uproar among the town's residents, who were concerned that development would spoil Southport's "fishing village charm." Luckily, former North Carolina Governor Mike Easley is a resident of Southport. He quickly reversed the decision and declared that the State Ports Authority would continue to own the marina. The state approved a lease for the facility to a new ownership group, Southport Marina, Inc., which has invested in significant repairs and upgrades.

Southport is ranked by both Rand McNally and Kiplinger as one of the most desirable places in the United States to retire. If you're seeking year-round fishing and golf, a low cost of living, and a relaxed lifestyle in a quaint community, you'll find it all in Southport.

In addition to the well-preserved historic neighborhoods of Southport, there has been rapid new development of planned communities aimed at retiring baby boomers and people looking for vacation homes. Most of these new planned communities are heavily oriented towards golf. There are over 30 golf courses in Brunswick County with more being built each year. Four courses in the St. James Plantation and Winding River Plantation communities are certified as Audubon Cooperative Sanctuaries.

Yet, despite being one of the fast growing areas in North Carolina, Brunswick County still has a population of less than 74,000, spread over hundreds of square miles and 45 miles of beaches.

Even the names of the communities in and around Southport are charming; neighborhoods that span the waterfront, riverfront and marina include: Arbor Creek, Cades Cove, Cape Fear River Heights, Carolina Place, Cottage Point, The Cottages at Price's Creek, Harbor Oaks, The Landing at Southport, Olde Southport, Smithville Woods, Turtlewood, and Westcott Farms.

Whether you choose a lovingly restored Victorian cottage in downtown Southport, or a newer home in a residential development, you'll enjoy the rich and romantic lifestyle that this quintessential small Southern town has to offer. If you would like to own a property in the charming harbor town of Southport, please Contact Us today.

Ready to Search for Southport Homes for Sale?