Figure Eight Island, a private and exclusive 1,300 acre island, is only accessible to approximately 450 island landowners and their guests via a guard-operated swing drawbridge (the only privately owned bridge on the Intracoastal Waterway). 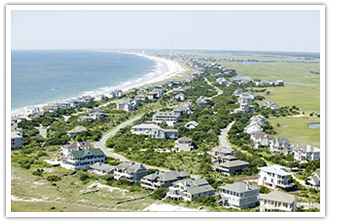 Once on the island, it's more about what you won't find than what you will find: there are no hotels, condos, shopping centers or commercial businesses, just a series of breathtaking multi-million dollar beach homes that span a five-mile stretch of traffic-free road.

Some say it is the sense of family; others credit its respect for privacy, secluded beaches, and the surrounding natural beauty. No matter the reason, everyone agrees that Figure Eight Island real estate is located in a special spot that inspires intrigue, mystique, and a touch of envy.

It is the pristine, placid, and low-key nature of the island that appeals to both its residents and visitors. For years, much of beautiful Figure Eight Island was uninhabited and isolated. In fact, the only residents of the island were maritime wildlife and wild horses who roamed the sandy dunes of this coastal community.

Because of its private nature, Figure Eight Island is an ideal place for wildlife. In fact, the island's name reflects the crooked creeks of the wide, beautiful marshes, which separate the island from the Intracoastal Waterway and mainland. The Homeowners' Association is active in its conservation, monitoring and protecting area sea turtles and other endangered plants and animals on the island. Nesting and migrating birds are abundant, as are schools of dolphins that frequent the channels that wind around Figure Eight Island.

The unspoiled white sandy beach with crystal-clear waters is a sight to behold. The area that surrounds the five miles of beach boasts tidal flats that are perfect for swimming, boating, fishing, and kayaking. The private beaches are also an ideal spot for shell-seeking excursions or meditative walks.

The tranquility of the natural setting is further enforced by community speed limits, which help to set the tone and pace on the island. Development has been limited to a yacht club, a marina, tennis courts, and a boat ramp.

In fact, it's easy to forget that just minutes beyond Porter's Neck Road, one finds the vibrant bustling communities of Porter's Neck, Hampstead, Wrightsville Beach, and Wilmington.  Residents of Figure Eight Island like to say: "Cross the bridge, drive along the causeway, and the rest of the world melts away..." 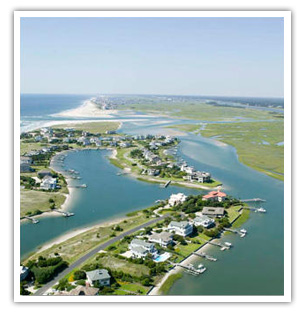 Figure Eight Island is the ultimate retirement retreat: ultra-exclusive privacy and security in a perfectly pristine locale just minutes from the amenities and conveniences of Wilmington and Wrightsville Beach, NC. Although Figure Eight Island remains untouched by commercial properties, every amenity one would need is conveniently located nearby.

Retirees are drawn to this peaceful oceanfront community and the surrounding conveniences just five miles away. The award-winning architecture of the homes on Figure Eight enhances the rich natural splendor of the island. Indeed, what was once referred to as "North Carolina's best-kept secret" is now the "glittering jewel of the Carolina coast".

The temperate climate, peaceful surroundings, and calm waters are also a big selling point for those seeking an idyllic location in which to enjoy their family and friends. During summer months, temperatures usually fluctuate between the 80s and 90s, with July being the hottest month. During the short winter, temperatures average in the 40s but sometimes dip into the 30s. The rest of the year brings pleasant, mild temperatures in the 60 to 70-degree range.

In short, Figure Eight Island is a highly coveted oceanfront community where one can enjoy retirement (and beach living) at its finest: inviting waters, soothing sands, picturesque surroundings, no tourists, no traffic, yet all of the amenities that Wilmington and New Hanover County have to offer. 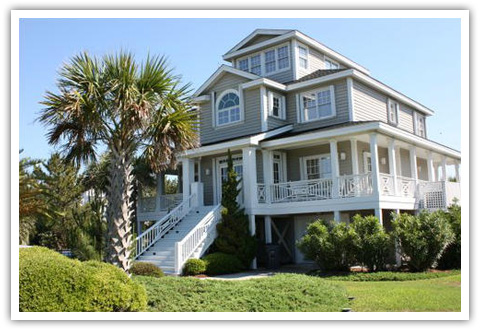 The oceanfront homes are designed for panoramic views of the Atlantic Ocean, while homes on the sound side of the island appeal to boating enthusiasts.

Local architects John Oxenfeld and Haywood Newkirk Sr. designed the island's early houses. Architects Ligon Flynn, Henry Johnston and landscape architect Dick Bell were later brought in to deliver their own influences to Figure Eight Island. The marina building's open, contemporary design earned Ligon Flynn an honor award from the state chapter of the American Institute of Architects. Flynn and Johnston designed in a way that would preserve the island's huge oaks and natural maritime forests, giving birth to the "treehouse" design for which the architects are so well known. This design garnered Johnston an award from the N.C. Chapter of American Institute of Architects.

Although a number of the houses for sale on Figure Eight Island end up functioning as year-round residences, other properties are used as second homes and luxury vacation rentals. If you would like to learn more about Figure Eight Island, please Contact Us today. We look forward to helping you make a home in this tranquil, non-commercialized seaside haven.

Ready to Search for Figure Eight Island Homes for Sale?