Saturday, January 28th at 6 pm, join AIW (Arts In Wilmington) for the first annual Wilmington Awards show at theArtWorks. This year’s celebration will honor four outstanding recipients from the area. Beer, wine, and heavy hors d’oeuvres will be served. 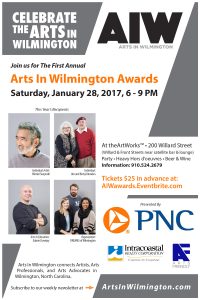 For more information:  Contact Craig Stinson at 910-524-2679 or craigstinson@intracoastalrealty.com

Recently, Encore Magazine did a feature on one of our agents, Craig Stinson:

Craig Stinson smiles and gives a little head shake. We have been discussing his project, Arts In Wilmington, and veered into a conversation about what the arts can or can’t do to heal societal ills. It’s oddly refreshing to hear someone actually put forth the idea that one visit to an inner-city school by a dance troupe for a master class might not be the missing element in eliminating prejudice from the world. Maybe “ars gratia artis” (“art for art’s sake”) is the point.

But back to Craig Stinson.

He’s a quiet man with a big smile. More so, he seems genuinely interested in collaborative work and listens attentively to other people’s ideas. Stinson started Arts in Wilmington as a newsletter in February of 2014.

“I just thought it would be fun to send out a newsletter every week with arts events happening,” he says. “I literally had five people the first issue. Two were me, one was my wife,” he says with a smile. “I’m almost at 1,400 subscribers now—by word of mouth.”

So, is Stinson making a living from this? No, he sells real estate by day.

“I just want people to know about the broad spectrum of stuff happening in Pender, Brunswick and New Hanover countiesm” Stinson tells. “Wilmington has one of the best arts scenes for an area this size, and it’s all so community-driven, which I love.”

Stinson has embarked on an interesting journey back to home. He moved away a little over two decades ago and in the meantime worked in arts administration in Washington D.C. and South Carolina. He cites the museum studies concentration at George Washington University as the motivator for persuing his degree there. He also worked with The Smithsonian, The National Endowment for the Arts, the Library of Congress, The Alamo …

“Really?” I interrupt him. “The Alamo? Was your office in the fort?”

He nods and gives me a surprised look.

This segued to South Carolina where he worked as program director for eight years at the South Carolina Arts Commission. “But I wanted to be home—I always wanted to get back to Wilmington,” he explains.

Stinson popped up on my radar about the time he started the newsletter. He was working in the Cucalorus office and we seemed to orbit each other. Then he started organizing networking events with Arts in Wilmington.

“There’s a lot of activity in Wilmington,” he says. “People hear of each other but sometimes they don’t know each other. We started the meetups so people could make that happen.”

Stinson rotates the location of the meetups monthly. He has utilized Flytrap Brewery on 4th Street and TheatreNOW on 10th Street, as well as art galleries like Eclipse at Blue Moon on Racine Drive and Spectrum Art and Jewelry at The Forum.

“Every time we have people come who have said, ‘I’ve never been in here,’” he notes. “They meet the owners, artists, performers. I think a lot of getting people involved is giving them a reference for the amenities in town.”

He says people then have a relationship with a venue and its location, including knowing where to park. It might sound minor, but it can actually be a pretty major hurdle for a business or venue.

About a month ago Stinson sent a notice seeking nominations for the first Arts in Wilmington Awards. My main inquiry for him was knowing how his newsletters and awards are any different from The Arts Council of WIlmington and New Hanover County. “I don’t give grants,” Stinson says. When Stinson decided to start the awards, rather than reinventing the wheel, he pretty much copied a model he has seen work: The South Carolina Arts Council’s Elizabeth O’Neill Verner Awards. “I want it to be as transparent as possible, [with judging that] has solid credentials behind it,” he explains.

Six categories will be covered in the awards: Arts in Education, Organization, Government, Business/Foundation, Individual, and Individual Artist. Stinson has tapped people from Mississippi, South Carolina, Florida, and DC to judge the nominations. “The plan is to have them reviewed by people outside of the area—who have really solid arts administration backgrounds and people who are not in Wilmington.”

Stinson is quick to point out the categories are open to interpretation. In “Government,” for example, a juror could be someone who is an elected official, or works in government or for a municipality. The “Individual” category presents questions about advocacy for arts, volunteering, fundraising, and arts administration. “They cast a wide net in very specific areas,” he notes.

Outside of joy of recognition for winning an award, Stinson says highlighting exceptional individuals and businesses leads to awareness beyond Wilmington. “Ultimately the arts serve as an ambassador for the town itself,” he says. “From my perspective, it’s an issue of awareness and recognition. [W]e’ve had a long history of community theatre and visual arts. Wilmington has always been an arts city.”

Stinson constantly hears from colleagues in other parts of the country who are surprised at how much happens in Wilmington. His job as a real estate agent makes him think about why people would move here. He says obvious reasons like climate and proximity to the beach and having a cool downtown are one. “But arts is one component of that,” he notes.As we veer toward a conversation about how to measure economic value of the arts in a community, Stinson surprises me again.

“Some people just know they can take classes or get involved in the theatre scene,” he says. “I think if you package the arts well, the economic implications become obvious. If you start from the economic issue of the arts, to me, it takes away from the intrinsic creative value and bravery that the arts engender They show bravery. People don’t understand how . . . intimidating it would be to get up onstage and put yourselves out there in front of people. That translates into all kinds of other aspects of people’s lives (be it starting businesses). You want to talk about economic development? Talk about people who stand on a stage or create a 2D or 3D piece of work, and put it out there for everybody.”

Stinson says Wilmington could call itself the “live-theatre capital of the East Coast.” He’s right. We have five to seven shows playing any given weekend. “So when you have a concentration of arts or arts activity, it ends up being the vanguard of economic development, in the sense that restaurants and retail pop up around it,” he continues. “Thus, housing values go up and people take pride locally and really reinforces sense of place.”

To nominate someone for an Arts in Wilmington Award, log onto www.artsinwilmington.com. The nomination deadline is April 29.