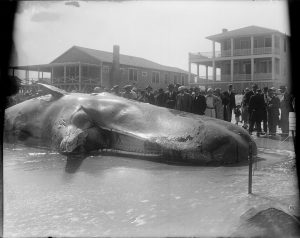 Soon after crossing the drawbridge from the mainland, you’ll reach a fork in the road and face your first decision at Wrightsville Beach. Bearing left will take you to the famous Johnnie Mercer’s Fishing Pier and near the site where a giant sperm whale named Trouble once washed ashore and refused to leave. Bearing right will take you to the classic downtown and points south, including the Coast Guard station and the site of the late, great Lumina Pavilion.

Either way, you can’t go wrong.

Either way, you’ll find a vibrant mixture of old and new.

Either way, amid landscape-altering attacks by both nature and developers, you’ll find the constancy of waves against sand.

The seaside town occupies one of the numerous barrier islands along North Carolina’s coast, which is 1,000-5,000 feet in width and stretches almost 4 miles from Masonboro Inlet to the south to Mason’s Inlet to the north (it lies between Figure Eight Island and Masonboro Island). This island containing Wrightsville Beach was once owned by the State of North Carolina and known as New Hanover Banks. It was transferred into private hands in three separate grants between 1791 and 1881. Development would have to wait, however, because distance and lack of transportation other than boats impeded accessibility. From the late 1700s until near the end of the 1800s, there were no residents and very few visitors except for some fishermen and hunters. Sailing soon became popular, and frequent races led to the founding of the Carolina Yacht Club in April 1853. Its members built a clubhouse, the first structure on what was now being called Wrightsville Beach after the Wright family who owned land on the nearby mainland. The Carolina Yacht Club held dozens of races every year and is now an integral part of the history of Wrightsville Beach, being recognized as the third oldest yacht club in the country. 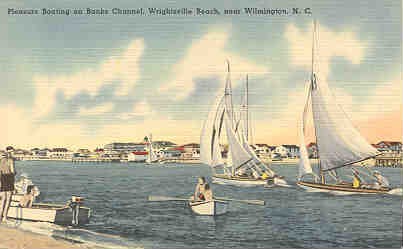 More development followed: another yacht club, two hotels, and several beach cottages. Wrightsville Beach was incorporated on March 6, 1899, with about 40-50 mostly seasonal residents. Just prior to that, accessibility to the beach began to improve when Shell Road, a passage for horse-drawn carts topped by oyster shells and following the route of current Wrightsville Avenue, was completed. Just a few months later, Wilmington Seacoast Railroad Co. built rail transportation, known as the open-air Beach Car, from downtown Wilmington to the Hammocks (present-day Harbor Island, a sizeable land mass formed as a result of dredging spoils from the Intracoastal Waterway in the early 20th century) with a footbridge to the beach. During the same year as incorporation, the rail line was extended across the Hammocks and onto the barrier island and then southward along what is now South Lumina Avenue. The Beach Car served as the lifeline to Wrightsville Beach, transporting thousands of visitors every summer until the trolley era began to give way to the automobile in 1935, when a two-lane bridge was built across the Intracoastal Waterway to Harbor Island and then over Banks Channel to the beach. 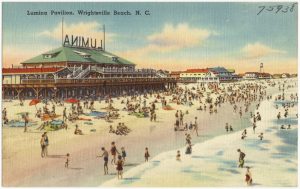 At the end of the Beach Car line was the sprawling and magnificent Lumina Pavilion, built in 1905 and offering 12,500 square foot of games and activities – including a dance hall, bowling alley, snack shop, shooting gallery, and movie screen in the surf – on three levels. Virtually every Big Band era band played there until the last, Vaughn Monroe, took the stage in early 1952. By then, times were changing and the Lumina’s popularity was waning. Crowds diminished as the trolley line came to an end in 1940, and the building deteriorated to the point of being condemned in 1972. It was demolished in 1973.

While the Lumina is no longer physically present, those who yearn for a simpler time when Big Bands played and people danced the night away can relive that era during Lumina Daze. The 21st annual event, chock full of nostalgia and reminiscing, will be 5-9 p.m. Aug. 27 at Blockade Runner Beach Resort, 275 Waynick Blvd. in Wrightsville Beach. Lumina Daze features live music, dancing, an inflatable movie screen showing a film on the lawn, a cash bar, food, a silent auction, and history displays. Tickets are $20 in advance at the Wrightsville Beach Museum of History, 303 W. Salisbury St. in Wrightsville Beach, or Blockade Runner, and they will also be available at the door. For more information, visit http://www.wbmuseumofhistory.com/events/lumina-daze, email wbmuseum@bizec.rr.com, or call 910-256- 2569.

Over the years, Wrightsville Beach’s year-round population grew as the area weathered and survived hurricanes, including Category 4 Hazel in October 1954, and a 1934 fire that destroyed hundreds of buildings on the north end of the island. Although the Beach Cars and Big Bands are gone, visitors still jam the streets as they make their way to the salt and sand at one of the nation’s most popular beaches.

Now that you know Wrightsville Beach’s history, let Intracoastal Realty help you make the storied area part of your future. We are a full-service real estate brokerage operating since 1976, and we currently have 13 offices with over 400 agents and staff to serve Southeastern North Carolina, including the areas of Wilmington, Wrightsville Beach, Carolina Beach, Kure Beach, Southport, Oak Island, Ocean Isle Beach, Leland, Hampstead, and Topsail Island.

One Response to “Our History Here: Wrightsville Beach”