Have you every heard of Stoneybrook?  If not, you’re missing out on a hidden gem in Wilmington.  Enter the winding streets from Middle Sounds Loop Road and you’ll feel like you’ve stepped back to a simpler time.  A time when people didn’t clear cut lots, neighbors greeted one another and gatherings were tucked away in someone’s private and peaceful yard under the trees.  There’s so much to love about this rustic, convenient and friendly neighborhood, including miles of connected neighborhoods for waking and biking and it’s only a quick drive to Mayfaire and Wrightsville beach.  Come see for yourself, but “Shhhhhh…”, we want to keep it one of Wilmington’s best kept secrets.

This is where newlyweds start their homes.

This is where some newlyweds have their honeymoon, right in their first home.

This is where one mother, juggling the demands of her 7-, 5- and 2-year-olds, gave up trying to find a bigger home elsewhere with an appropriate configuration.

“You just can’t find anything else like this setting anywhere around Wilmington,” said Beth Terry, who with husband, John, a mortgage consultant for Wells Fargo, bought a Stoneybrook home in 2005. “So we figured let’s take the money we would have spent on a Realtor, renovate our home here, open up the downstairs, get all the bedrooms on the second floor, and put in a pool.

“We’ve got hawks out back sitting on the fence, deer on the other side of it and we’re five minutes from Mayfaire,” said Beth, adding that Ogden Elementary is just around the corner. “It dawned on us: why would we go anywhere else.”

Anywhere else but Stoneybrook, where homeowners began raising families in the 1980s in the Ogden-area development tucked inside Middle Sound Loop Road and its name usually is mentioned with the preceding adjective: rustic.

Those who do move on, look back with envy.

“We regret ever leaving,” said Claire Reddick, the Intracoastal Realtor who, with husband, Daniel, put their Stoneybrook home for sale after buying in the Porters Neck area. “Beth did a smart thing by staying and renovating. It’s a unique place. The values have dropped some, as they have elsewhere. It’s different, though, because you can’t replicate it. 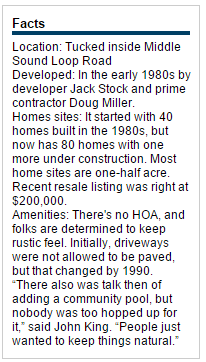 “It’s not for everybody, but a special buyer knows the value because it’s so rustic.”

Claire and Daniel, who owns Redix lifestyle outfitters, had moved in as newlyweds in 2006.

Topping that, Gwen Wells-Loiacono and husband, Richard Loiacono not only bought and built their home in Stoneybrook in 1997, but they also honeymooned in it.

The feisty Wells-Loiacono, co-owner of ReelSistersTalent.Com, raves about raising her children there the past two decades. One of them, Hannah, made her way through Ogden Elementary and later Laney High School and now is in the movies, and recently had a nice role in a music video with Darius Rucker.

As for a recent movie, the mother Gwen reports it this way: “In one scene, Ryan Reynolds got to kiss Hannah.”

As for Stoneybrook, the neighbor Gwen reports it this way: “It’s all custom homes in here, so all of them are different. You’re close to everything but out in the woods. It’s (you guessed it) so rustic.”

There’s also a light touch: One cul-de-sac in the woodsy, er rustic, neighborhood is named Bedrock Court, and one homeowner there has the Flintstones painted on the mail box.

“I was one of the original homeowners,” said Julie Jackson, who built a home with husband, Jeff, in 1985, but have now returned to their hometown of Goldsboro.

“This was the best neighborhood we ever lived. Almost every weekend we would gather at someone’s house for dinner with everyone contributing to the meal. When it turned warm we would gather in the street and bring our grills out and everyone just hang out cook, eat and play. In the fall and winter someone would have an oyster roast. We would have neighborhood Easter egg hunts, I played the bunny, and during the holidays we would have progressive dinners.”

Beth Terry, with her toddlers in tow, hopes to recreate some of that.

“The kids are sorta time-consuming now,” said Beth. “I heard what it was like back then. We plan to make it like that again.”