The coastline of North Carolina has been called the “Graveyard of the Atlantic” due to the great number of ships that have wrecked in its waters. The barrier islands that stretch along the coast, constantly changing tides, and drifting sands made passing the inlets almost impossible for men and ships unfamiliar with the area.  The treacherous shores, inlets, and coves attracted pirates and smugglers with the security of isolation.  They used the barrier islands as a central base of operations to intercept British and Spanish ships laden with gold, silver and other riches.

Privateers or Pirates = big business. The golden age of piracy ran from the late 1600’s to the early 1700’s. Some of the first privateers are well known historical figures:  Sir Francis Drake, Christopher Columbus, and Sir Walter Raleigh.  A privateer was differentiated from a pirate by a note called a “Letter of Marque” from a reigning monarch specifically granting authorization to capture and confiscate another nation’s merchant ships.  Privateers operated independently, apart from the navy, but were an accepted part of naval warfare from the 1500’s to the 1800’s.  Private investors paid for privateering in hopes of profiting from stolen goods, while governments appreciated the damage they did to enemy commerce.

Pirates often started out as privateers, eventually becoming independent business men with their own code of ethics or “pirate’s code”.  Their eye was always on the prize, ships laden with treasure.  Aside from Hollywood movies, the objective was to capture ships and not sink them.  An intact ship and the treasure it contained was the reward and the crew members remaining alive through the conflict were trained seamen easily converted to pirates.  What other options did they have?

Bird Island is the last undeveloped barrier island in Brunswick County, and one of the few remaining natural barrier islands in the mid-Atlantic region.  At one time, Bird Island was separated 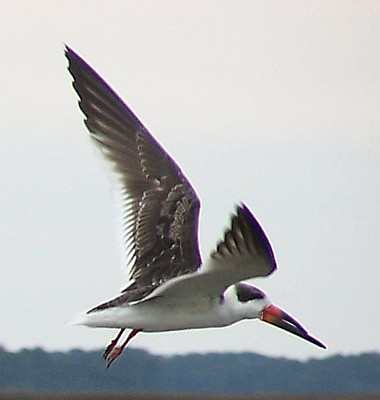 from Sunset Beach by a tidal creek (Mad Inlet) that could only be crossed at low tide.   Accretion of sand from storms and conservation efforts has gradually filled in the tidal creek so that two separate islands became one.
Privately owned prior to 2002, Bird Island was a prime target for resort development.

Handwritten pleas, posted in the Kindred Spirit mailbox located on the island (and a destination site in its own right) stopped development of the island.  The State of North Carolina used $4.2 million dollars of public and private funding to purchase the land and create a coastal reserve, administered by the North Carolina Division of Coastal Management.

Now an uninhabited 1,300 acre State Preserve comprised of salt marsh, tidal creeks, highnatural dunes, and pristine sandy white beaches, Bird Island has become a popular destination.  It is one of ten sites that make up the North Carolina Coastal Reserve and National Estuarine Research Reserve.  This coastal ecosystem is an outdoor laboratory about processes, functions, and influences that shape and sustain the coastal area.

The shoreline, dunes, and marshland of Bird Island provides important habitat and nesting for species that are endangered, threatened, or of special concern.  Guided educational walks to Bird Island are hosted by the Bird Island Preservation Society Stewards.  Walks begin at Sunset Beach’s 40th Street walkover and the beach at 8:30 am every Wednesday from June through August, and last about 2 ½ hours. 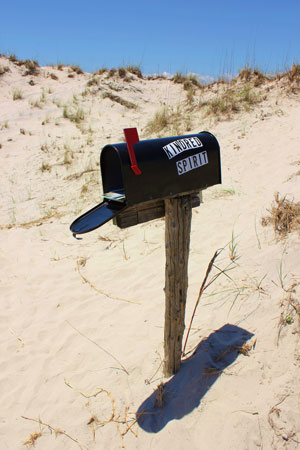 formed as a result of the Kindred Spirit mailbox.  It is a story of mystery and spiritual awakening.  The Kindred Spirit mailbox has become a popular destination for many visitors to Sunset Beach, NC.  No one knows who first placed the mailbox there more than 30 years ago, although they left this note: “Twenty seven years ago I walked the tide line of Bird Island.  In the distance – right on the low tide line – I saw the silhouette of a rural mailbox.  However, I never could reach it – for it was a mirage.  The very next weekend, I “planted” the original Kindred Spirit mailbox”.

On the uninhabited state preserve of Bird Island now one with Sunset Beach, the mailbox resides among the dunes more than a mile past the last public beach access on Sunset Beach. Visitors can sit on a nearby bench and write their own personal message inside the mailbox’s journal.  People pen thoughts, dreams, hopes, bits of wisdom, deepest secrets, and words of grief.  It has become a place of solace and introspect with entries from new and returning visitors.

Messages can also be mailed to an associated P O Box where they are held with “love, honor, and respect by Kindred Spirit”.  Full journals and worldwide messages are archived in the Randall Library at the University of North Carolina at Wilmington for anyone to view.  The Kindred Spirit also has its own website http://kindredspiritbox.com and many of the personal thoughts and hopes left in the mailbox are now published on the site.

Plan a visit. Feel the sand under your feet, listen to the waves, browse through the journals and letters, and take time to pen your own note.  The mail box is waiting for you to become a Kindred Spirit.