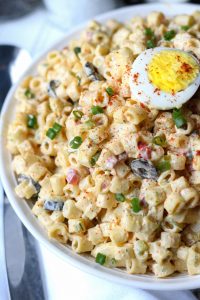 September’s deviled egg macaroni salad is sure to be a hit at your Labor Day brunch or next beach barbecue. It’s a super easy recipe with just a few simple ingredients, packed with deviled eggs and combined with creamy pasta. Make ahead so you can chill out and enjoy your day!

9/9: Run Holden Beach – Under the Bridge on Jordan Blvd

As our partnership with Luxury Portfolio allows, Intracoastal Realty’s listings are often featured on LuxuryPortfolio.com. We often spotlight outstanding listings around the world and become enamored with the many features, outdoor spaces, and interior design and decor of these lavish properties. This month the properties listed showcase spectacular surroundings in exceptional locations! We hope you enjoy learning more about these three extraordinary homes.

Enjoy the Mediterranean lifestyle right here in Wilmington. Set back on a lot with close proximity to much of what the Country Club of Landfall has to offer, this home boasts views of our Dye Golf Course and has wonderfully landscaped front and back yards complete with pool and fountain.

This stunning home boasts custom details throughout, nothing has been overlooked in this 5,676 square foot home. The downstairs of the home has been expertly designed to take advantage of the views of the 17th fairway as the living area opens up directly to the sprawling patio and pool. In addition to the living areas including chef’s kitchen with Sub-Zero and two dishwashers, the first floor contains formal living and dining rooms, and a master en suite with radiant heated floors.

Pleasure Island, a barrier island south of Wilmington in New Hanover County, includes the municipalities Carolina Beach and Kure Beach as well as the unincorporated areas of Fort Fisher, Wilmington Beach, and Hanby Beach. Snow’s Cut, which connects the Intracoastal Waterway to the Cape Fear River and borders the island on the north, was completed in 1930. Before this, Pleasure Island was a peninsula known as Federal Point. The official history of Pleasure Island, by its known name, began in 1972, the local Chamber of Commerce adopted the name Pleasure Island for use as a branding and marketing tool to combine all the resources of the area.

The most populous beach town on Pleasure Island began to take shape in the 1880s when Joseph Winner, a Wilmington merchant, planned the streets and lots for 108 acres of beach property and called it St. Joseph. A street bearing that name runs along the northwestern part of the island and through the original Winner tract.

Although that initial attempt at development was unsuccessful, within less than a decade the area was beginning to draw attention as a resort. Electricity arrived in 1915, and soon expanded highways made the area more accessible to people from other parts of the state. In 1925, the town of Carolina Beach was incorporated. After the Snow’s Cut projected separated the area from the mainland in 1930, a temporary wooden bridge and then later a swing bridge operated until 1962, when the present-day concrete high-rise bridge opened.

Over the years, Carolina Beach arose as a booming beach town with many amenities and attractions, including its famous Boardwalk and several large hotels. The population and popularity grew, even as the area weathered and survived hurricanes, including Category 4 Hazel in October 1954, and a 1940 fire that destroyed two blocks of the Boardwalk.

The history of Carolina Beach included a rough period in the 1990s when much of its Boardwalk area was rundown and vacant, attracting adult businesses and cultivating a bad reputation. During the next decade, community efforts to beautify and improve Carolina Beach took shape, and today the beach town is known all over the country for its family-friendly atmosphere and rebuilt, expanded wooden Boardwalk.

One of the most enduring and beloved businesses in town is Britt’s Donut Shop, which opened on the Boardwalk in 1939 and has stuck to the same product, plain glazed doughnuts served hot out of the fryer, since inception. It operates March-September and attracts large crowds who come for a taste of sugar and nostalgia year after year.

Development here began in the late 1800s when Hans Andersen Kure, a retired sea captain, moved from Denmark and bought large tracts of land in the middle of what is now known as Pleasure Island. Kure Beach was incorporated until 1947. It is known for its large fishing pier, the oldest on the East Coast, which Kure’s son originally built in 1923. Among its most notable modern additions is Ocean Front Park, which opened in 2013 and overlooks the Atlantic Ocean. It serves as the backdrop for a number of special events throughout the year.

Until the last few months of the Civil War, Fort Fisher on the southern end of present-day Pleasure Island kept North Carolina’s port of Wilmington open to blockade runners supplying necessary goods to Confederate armies inland. By 1865, the supply line through Wilmington was the last remaining supply route open to Robert E. Lee’s Army of Northern Virginia. When Fort Fisher fell after a massive federal amphibious assault on January 15, 1865, its defeat helped seal the fate of the Confederacy. Today, you can learn about this history at the Fort Fisher State Historic Site, which includes a museum and gift shop, or just enjoy the beach at the Fort Fisher State Recreation Area or the wildlife at the N.C. Aquarium at Fort Fisher.

Fun fact: Pleasure Island and Bald Head Island, to the south in Brunswick County, are actually joined together since 1999, when shoaling from Hurricane Floyd closed Corncake Inlet. It is possible to walk or bike between the two destinations, especially during low tide.

For more information about the history of Pleasure Island, visit the Federal Point Historic Preservation Society website or, better yet, stop by to check out the Federal Point History Center’s exhibits and resources, including a gift shop with books and other items for the local history buff. During summer months, Tasting History food tours also provide a glimpse of what the island used to be like while stopping at several Carolina Beach restaurants for tastings.

Now that you know the history of Pleasure Island, let Intracoastal Realty help you make the storied area part of your future. We are a full-service real estate brokerage operating since 1976, and we currently have 13 offices with over 400 agents and staff to serve Southeastern North Carolina, including the areas of Wilmington, Wrightsville Beach, Carolina Beach, Kure Beach, Southport, Oak Island, Ocean Isle Beach, Leland, Hampstead, and Topsail Island.