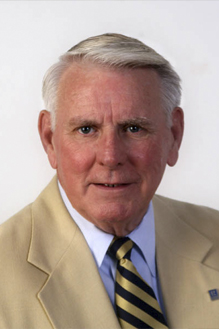 Jim is a native North Carolinian, born in Charlotte, NC. In his adolescent years, he played football and baseball; and attended Myers Park High School. Jim entered USAF in 1954 and retired in 1975. Shortly thereafter in 1977, he became a licensed Real Estate Broker. Jim has traveled the world over…visiting a whopping 47 foreign countries; not to mention, he has seen all 50 states in the US!

Since he has been in Wilmington, he has owned several businesses over the course of the past 26 years. Jim’s hobbies include golf, fishing, and watching College Baseball and Football. Holding several leadership positions in the community, he has served has as President of the Arab Shrine and the Azalea City Kiwanis Clubs. He was also Captain of the Sudan Drum and Bugle Corps, Team Manager of Post 10 Baseball. Jim is currently a member of the Sudan Shrine Temple, Azalea City Kiwanis Club, American Legion Post 10, NCAR, WRAR, and the AFSA. Intrinsic to his extensive community involvement, he truly enjoys helping others.