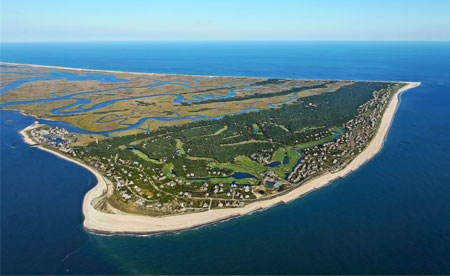 You can’t get much more “unplugged” than Bald Head Island. The southernmost of North Carolina's cape islands, Bald Head Island is located two miles out to sea from the quaint fishing village of Southport, NC, where the Cape Fear River meets the Atlantic Ocean. The secluded island is only accessible via passenger ferry or private boat. Automobiles are not permitted on this ecological paradise; instead, residents and visitors drive modified, energy-efficient electric golf carts, ride bicycles, or travel on foot.

Traffic isn’t the only thing you leave behind when you set foot on Bald Head Island. There are no high rises, no chain restaurants or retailers, and no crowded beaches—only 14 miles of pristine sandy shore, natural salt marshes, and a maritime forest preserve.

The island’s residents (around 200 year-round households) live peacefully in expansive, yet tasteful, Bald Head Island real estate painted in muted colors so as not to compete with the natural surroundings. The island also does a strong business in exclusive luxury vacation rentals and fractional ownership cottages.

With 10,000 acres of beach, marsh and maritime forest preserve, nature is the star attraction on Bald Head Island. The Bald Head Island Conservancy takes an active part in protecting the island's flora and fauna, including the loggerhead sea turtles that lay their eggs on the beaches every year. Numerous rare species of birds also call the island home, making it a birdwatcher's paradise. With pristine beaches and miles of recreational trails, Bald Head Island is an ideal environment for walking, running or cycling. 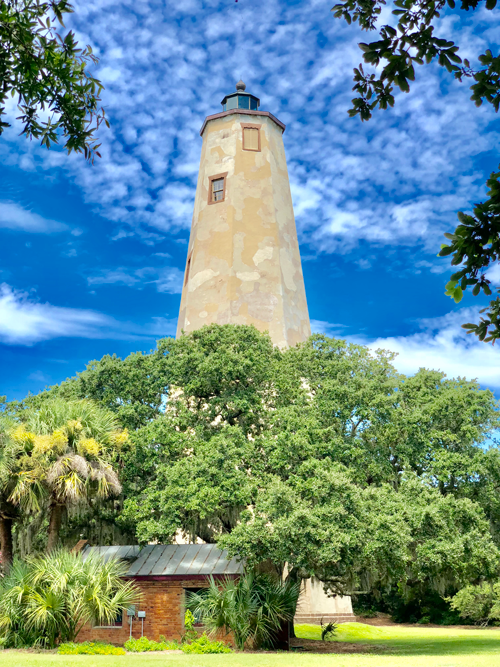 Mother Nature gets an assist from The Bald Head Island Club, located on the near end of South Beach, facing the Atlantic Ocean. The Club is open year-round so that residents and visitors can take advantage of its many amenities. In addition to an 18-hole championship golf course, the club also offers a 25-meter outdoor swimming pool, four state-of-the-art tennis courts, a fitness center, an outdoor playground for children, and croquet greenswards. Indeed, croquet is a popular sport on Bald Head Island, drawing players from all over the world.

The Bald Head Island Club offers fine dining at the Club Restaurant, casual dining at the poolside Horizons, and a quick bite to eat at the Snack Bar at the Turn. Other restaurants on Bald Head Island include: Jules Salty Pub and Island Grub and Delphinas.  Other retail shops include a fully stocked grocery store, a pro shop for golfers, clothing boutiques, a hardware store, and Riverside Adventure Company, which has bike rentals, beach rentals, surfboards, and kayaks. Additional shopping and restaurants can be found on the mainland in Southport, Carolina Beach, and Wilmington, NC.

The Bald Head Island Marina has 153 slips and accommodates vessels up to 95 feet in length. Water and electric hookups are provided on most boat slips in addition to fueling stations, restrooms, laundry facilities, pump-out stations, and showers. Additional slips and marina services are available at the Indigo Plantation Marina and the Deep Point Marina and Ferry Terminal in nearby Southport.

Residents and visitors enjoy boating, fishing, kayaking, swimming, and exploring the maritime forest. The best picnic spots are found under the shadow of "Old Baldy", North Carolina’s most famous out-of-service lighthouse. Built in 1817, this octagonal brick and plaster lighthouse is the oldest in the state, still standing tall at ninety feet. A replica of the 1850s keeper’s cottage sits adjacent to the lighthouse and houses the Smith Island Museum, which celebrates the region’s maritime history.

Indeed, history buffs relish Bald Head Island’s intriguing past. Native Americans favored the island for the excellent fishing opportunities it provided. Bald Head Island also played a role in both the Revolutionary and Civil Wars. During the American Revolution, the island was home to Fort George, a British fort. During the Civil War, the same post served as Confederate base, Fort Holmes. But the island’s most adventurous historical role was that of a stopping point for pirates who replenished their provisions and buried their booty while sailing from New England to the Bahamas. Bald Head Island was the preferred hideout for Edward Teach, more commonly known as Blackbeard, who commandeered vessels run aground on the treacherous Frying Pan Shoals. Today, the streets of Bald Head Island (known to locals as BHI) are named after Teach and other pirates like Stede Bonnet.

Bald Head Island is an incorporated municipality with its own fire department and community police department. Anyone who purchases Bald Head Island real estate can feel safe knowing all island firefighters are paramedic-level certified, and a basic medical treatment room is available at the main fire station. For emergency treatment, transportation is available to Dosher Memorial Hospital (just minutes from the mainland ferry terminal) or to Brunswick Hospital or New Hanover Regional Medical Center in Wilmington.

Bald Head Island is the ultimate retreat for those who seek a peaceful, secluded lifestyle free from the headaches of traffic, pollution, overcrowding, and commercialization. The temperate climate, stunning surroundings, and "unplugged" pace are big selling points, making it an idyllic location in which to enjoy one's golden years. In short, Bald Head Island is a true island community where one can enjoy retirement and coastal living at its finest.

Developers carefully planned the neighborhoods of Bald Head Island to blend seamlessly with the natural habitat. Most homes, whether small cottages, or large luxury villas, are built in a traditional coastal style. Properties sit near the ocean, on the river beach, in the charming harbor, or nestled in the dense marsh and maritime forest. Others sit adjacent to the championship golf course. White picket fencing surrounds some neighborhoods, and connecting walkways allow residents to easily walk to their neighbors' homes for dinner.

Superbly crafted homes in this remarkable island community range in price from $430,000 to $3.2 million. If you don't find a new or pre-owned home for sale that suits your needs, you can always consider a ready-to-build lot. Lot prices range from about $94,500 to nearly $2 million. Bald Head Island has a featured builder program for both portfolio homes and custom designs. Looking for a vacation home or a yearly retreat? Consider a shared ownership cottage with prices starting at $60,000.

Properties on Bald Head Island are more than just houses; they are the gateway to an exclusive, peaceful existence in an unspoiled retreat. If you would like to experience the ultimate "unplugged" lifestyle by owning a home on Bald Head Island, please Contact Us today. We look forward to helping you discover all of the beautiful Bald Head Island homes for sale and replace noisy streets and traffic jams with quiet afternoon strolls across your own timeless island.